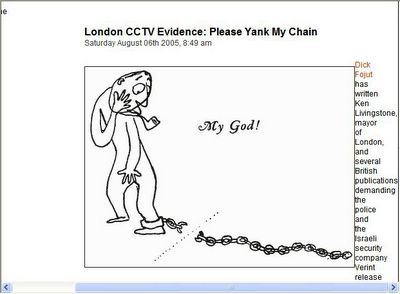 Dick Fojut has written Ken Livingstone, mayor of London, and several British publications demanding the police and the Israeli security company Verint release CCTV video footage of the London subway bombings. Of course, the British government will do no such thing, as the United States government refuses (nearly four years later) to release the video footage (taken by a nearby security camera) of the supposed plane hitting the Pentagon. If indeed the London CCTV footage contained images of Muslims with explosive backpacks, we’d see it run 24/7 on Fox News and the BBC. But since no such footage exists, we are expected to believe whatever nonsense the Brits tell us, same as were expected to believe the fairy tale of cave-dwelling Muslims attacking New York and Washington. It should be noted that the cameras at Newark and Dulles airports were confiscated by the FBI, according to Michael Taylor, president of American International Security Corp, and an FBI spokesman later said he knew nothing about this.
In other words, the video imagery of the nine eleven hijackers disappeared, although there exists two video clips of Mohammed Atta and Abdul Aziz al-Omari passing through security at the Portland airport (and also selected video stills of Atta and al-Omari at a gas station, an ATM, and Wal-Mart), although this proves absolutely nothing and does not place the pair on flight 77 departing from Boston. None of the original passenger manifests of the hijacked planes carry any of the names of the alleged hijackers (see passenger names here, here, here, and here) or did the Armed Forces Institute of Pathology, tasked with identifying the bodies, find any Arab remains, according to Thomas R. Olmsted, M.D, an ex-Naval line officer and a psychiatrist. In short, there is no documentary evidence Arabs hijacked and crashed airplanes on nine eleven. And now in London the government is pulling the same scam, claiming crazed Pakistanis are responsible for suicide bombings killing over 50 people and yet providing no evidence of this.
But what is really disturbing is that millions of people believe these cock and bull stories and do not require evidence before allowing their governments to invade small defenseless countries (linked to terrorist events, again without sufficient evidence) or methodically dismantle civil liberties (it would appear, at least in the United States, most people have a vague understanding at best of their civil liberties and the Bill of Rights). Many citizens are not only ill-informed, they are largely unsuspicious of government—in fact, they seem to believe government will protect them, would not lie to them, or kill them for political reasons.

-->
» Home > Politics > London CCTV Evidence: Please Yank My Chain 6 Comments so far Leave a comment
Let me make this clear, this has absolutely nothing to do with the fact that the guy we have imported (deport the bastard Tony) to run the London Undergound is ex (if there is such a thing) CIA.
It is important to understand that there are legal issues, sub judice, habeus corpus, scandalum magnatum to consider , not to mention the procedures for providing copies, electronic imagery, video, hand painted pictures or otherwise contrary to Section 224 (b) of the Regulations covering ” London Transport Pictures - Criminal Evidence, Proceedings which might embarass the Gubment Act” the guy who has the keys died unexpectedly is on holiday, nobody really knows how this thing works, and maybe the cleaner wiped it clean, anyway if and when we think it would be useful we’ll make sure you get to see it.
Meanwhile we’ve just been told by Dame Ian Blair to get ready for another public execution “incident” …
Glad to be of assistance.
Have a nice day. Comment by ziz 08.06.05 @ 9:02 am
Pretend you were a legitimate journalist interested in using credible information for your articles for a second.
You receive an email asking you to do a story on a topic which references a number of other stories on a website. What is the very first thing you check ?
That’s right… the front page of said website. After all nobody wants to get a legitimate looking tip about under-counting of 7000 US military fatalities in Iraq only to find the website recommends “there was no holocaust” books and the author is a known forger.
You think references to Rense in request like that would actually do anything other than taint all future requests for the exact same investigation as coming from kooks ? Comment by pyrial 08.06.05 @ 9:08 am
What can you say Kurt? The Media have systematically dumbed down the world poplulace over a period of time. Nobody questions anything now. They’re too busy watching Oprah and driving to soccer games with ‘Support the Troops’ stickers. The only solution is the draft. Things have to get alot worse before they get better any better. When the average joe is shipped off to another country and starts to see the truth, when brothers,sons, fathers start dying on a much larger scale than MAYBE, just MAYBE people might wake up and smell the coffee.
We are already living in Police States which are becoming more repressive by the day. I am seriously thinking of moving to some chaotic third world country where the Govt doesnt have a plan to microchip your ass. As far as Western countries goes the party is over….the slide into hell continues but noone wants to know. Comment by dario 08.06.05 @ 9:21 am
“Legitimate” as in accepted by the corporate media. Rense runs a few articles questioning the Holocaust, meanwhile Fox runs “articles” making excuses to kill thousands of people in Iraq. Brainwashing runs deep, pyrial, and you seem to be our primary specimen. Comment by Kurt 08.06.05 @ 9:40 am
But what is really disturbing is that millions of people believe these cock and bull stories and do not require evidence …Many citizens are not only ill-informed, they are largely unsuspicious of government—in fact, they seem to believe government will protect them, would not lie to them, or kill them for political reasons.
So in summary you think that citizens should demand video evidence and that they are not suspicious enough.
Meanwhile your two previous articles relate to a video being released and it not being good enough because you are too suspicious. Comment by pyrial 08.06.05 @ 9:49 am
You missed the point, probably on purpose. The FBI confiscated the video at Logan and Dulles and all we have are a few stills and a short clip from Portland, and none of the other hijackers. This does not make you suspicious? Or maybe you don’t need evidence because you are all too willing to believe Arabs did it and want revenge. If you have other reasons, please let us know. Comment by Kurt 08.06.05 @ 9:56 am
Posted by Unknown at 8/06/2005 11:02:00 PM