The New York Times > Opinion > Op-Ed Columnist: Smoke Gets in Our News

BG: Would somebody tell me why the NYT can't find editorial page writers that don't err by sabotaging themselves? Ms. Dowd, supposedly writing for the cause of female voices on the MSM editorial pages, just comes off sounding ditzy.

Go ahead, readers, flame me if you think I'm wrong.

The New York Times > Opinion > Op-Ed Columnist: Smoke Gets in Our News

April 20, 2005
OP-ED COLUMNIST
Smoke Gets in Our News
By MAUREEN DOWD

In the free fall of TV news, ABC's attempt to create a successor for Ted Koppel's "Nightline" will go down as one of the most hilariously embarrassing moments.

One show tested recently, according to reports, was set in a nightclub. It had white tablecloths, candles, a jazz quintet, a live audience at little tables and - this is not a joke - faux fog.

The nightclub segments that were tested had Gen X hosts and guests, and red-blue debates on Michael Jackson, the Olsen twins' "dumpster chic" and "mad as hell" rants.

ABC decided not to go with the smoke machine. Still, Ted Koppel - who vowed last year to leave "Nightline" before he was forced to cover "wet burka" contests - must be spinning in his country home.

Les Moonves of CBS has said that with the sonorous era of Dan, Tom, Peter and Ted coming to an end, viewers are no longer interested in "voice-of-God, single-anchor" formats.

But who knew they would prefer the voice of Frank? A ring-a-ding Sinatraesque "one for my baby and one more for the road" network voice?

In Washington last week, Rupert Murdoch echoed Mr. Moonves in giving the American Society of Newspaper Editors some bad news about young people in the age of the Internet, blogging and cable news:

The white smoke yesterday signaled that the Vatican thinks what it needs to bring it into modernity is the oldest pope since the 18th century: Joseph Ratzinger, a 78-year-old hidebound archconservative who ran the office that used to be called the Inquisition and who once belonged to Hitler Youth. For American Catholics - especially women and Democratic pro-choice Catholic pols - the cafeteria is officially closed. After all, Cardinal Ratzinger, nicknamed "God's Rottweiler" and "the Enforcer," helped deny Communion rights to John Kerry and other Catholic politicians in the 2004 election.

The only other job this pope would be qualified for is "60 Minutes" anchor.

President Bush has also long acted as if he channeled the voice of God. And now Tom DeLay and Bill Frist are also pandering to the far-right-wing and evangelical Christians by implying that God speaks - and acts - through them, too.

Mr. Bush's more subtle obeisance to the evangelical right is no longer enough. Puffed up with its electoral clout, the Christian right now wants politicians to genuflect openly.

The doctor who would be president is down on both knees. He's happy to exploit religion by giving a video speech on a telecast next Sunday that will portray Democrats who block the president's judicial nominations as being "against people of faith."

A flier for the Christian telecast, organized by the Family Research Council, shows a confused teenage boy with a Bible in one hand and a judge's gavel in the other. The text reads: "The filibuster was once abused to protect racial bias, and it is now being used against people of faith."

The born-again Tom DeLay has been fighting his ethical woes by acting like a martyr for some time. Dr. Frist, by contrast, was not known for playing the religious card before. But he is clearly willing to turn himself over, lock, stock and barrel, if it will help him marginalize such Christian-right faves as Rick Santorum and Sam Brownback, and garner support from those who always vote because they see elections in terms of eternity.

Even Senator Lindsey Graham of South Carolina, a Bible-Belt Republican, seemed surprised by the brazen move by Dr. Frist, the Senate majority leader. He told Newsweek: "Questioning a senator's motives in that way is a very dangerous precedent."

And, of course, the Democrats are apoplectic. "I cannot imagine that God - with everything he has or she has to worry about - is going to take the time to debate the filibuster in heaven," Senator Richard Durbin of Illinois said.

As they toy with less lofty multiple-anchor formats, the networks may be more open to women. But at the Vatican and in the Christian right's vanguard, we can be sure that the voice of God is not female. 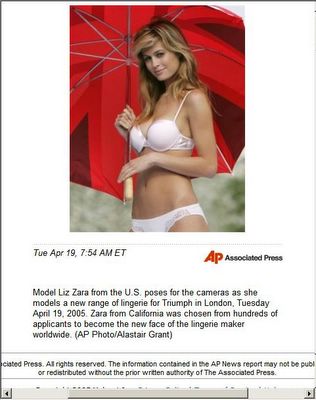 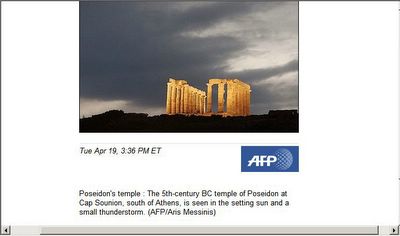