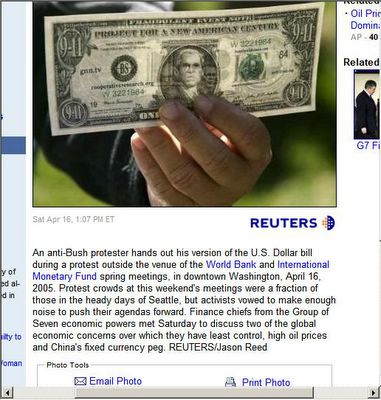 BG: Here is a Reuters photo posted on Yahoo news today with the following copy:

An anti-Bush protester hands out his version of the U.S. Dollar bill during a protest outside the venue of the World Bank

No, Mr. Reed, this is much bigger than some simple anti-Bush campaign. This is about much more than "activists making noise".
Technorati Tags: sept11 World Bank IMF
Posted by Unknown at 4/17/2005 07:04:00 PM No comments:

The Washington Monthly: LACKING SELF-CONTROL....Brad Plumer points to a survey of two studies by psychologists who found that people who are socially