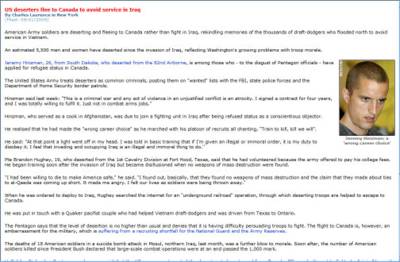 US deserters flee to Canada to avoid service in Iraq
By Charles Laurence in New York
(Filed: 09/01/2005)
American Army soldiers are deserting and fleeing to Canada rather than fight in Iraq, rekindling memories of the thousands of draft-dodgers who flooded north to avoid service in Vietnam.
An estimated 5,500 men and women have deserted since the invasion of Iraq, reflecting Washington's growing problems with troop morale.

Jeremy Hinzman: a 'wrong career choice'
Jeremy Hinzman, 26, from South Dakota, who deserted from the 82nd Airborne , is among those who - to the disgust of Pentagon officials - have applied for refugee status in Canada.
The United States Army treats deserters as common criminals, posting them on "wanted" lists with the FBI, state police forces and the Department of Home Security border patrols.
Hinzman said last week: "This is a criminal war and any act of violence in an unjustified conflict is an atrocity. I signed a contract for four years, and I was totally willing to fulfil it. Just not in combat arms jobs."
Hinzman, who served as a cook in Afghanistan, was due to join a fighting unit in Iraq after being refused status as a conscientious objector.
He realised that he had made the "wrong career choice" as he marched with his platoon of recruits all chanting, "Train to kill, kill we will".
He said: "At that point a light went off in my head. I was told in basic training that if I'm given an illegal or immoral order, it is my duty to disobey it. I feel that invading and occupying Iraq is an illegal and immoral thing to do.''
Pte Brandon Hughey, 19, who deserted from the 1st Cavalry Division at Fort Hood, Texas, said that he had volunteered because the army offered to pay his college fees. He began training soon after the invasion of Iraq but became disillusioned when no weapons of mass destruction were found.
"I had been willing to die to make America safe," he said. "I found out, basically, that they found no weapons of mass destruction and the claim that they made about ties to al-Qaeda was coming up short. It made me angry. I felt our lives as soldiers were being thrown away."
When he was ordered to deploy to Iraq, Hughey searched the internet for an "underground railroad" operation, through which deserting troops are helped to escape to Canada.
He was put in touch with a Quaker pacifist couple who had helped Vietnam draft-dodgers and was driven from Texas to Ontario.
The Pentagon says that the level of desertion is no higher than usual and denies that it is having difficulty persuading troops to fight. The flight to Canada is, however, an embarrassment for the military, which is suffering from a recruiting shortfall for the National Guard and the Army Reserves.
The deaths of 18 American soldiers in a suicide bomb attack in Mosul, northern Iraq, last month, was a further blow to morale. Soon after, the number of American soldiers killed since President Bush declared that large-scale combat operations were at an end passed the 1,000 mark.
Lt Col Joe Richard, a Pentagon spokesman, said that the US government wanted the deserters to be returned from Canada. "If you don't want to fight, don't join," he said.
"The men in Canada have an obligation to fulfil their military contracts and do their duty. If and when they return to this country, they will be prosecuted."
The penalty for desertion in wartime can be death. Most deserters, however, serve up to five years in a military prison before receiving a dishonourable discharge.
In order to stay in Canada, deserters must convince an immigration board that they would face not just prosecution but also "persecution" if they returned to America. Hinzman's hearing has begun in Toronto and a decision is expected next month.
During the Vietnam war an estimated 55,000 deserters or draft-dodgers fled to Canada. There were amnesties for both groups in the late 1970s under President Jimmy Carter, but many stayed.
One who did so is Jeffrey House, a Toronto-based lawyer, who represents some of the deserters. He said that at least 25 had reached Canada in recent months with the help of "railroad" organisations, and believed that the immigration board would back his clients.
19 April 2004: US 'soldiers of conscience' take Sixties route to Canada
18 December 2004: US military sees sharp fall in black recruits